Control – Watch out for this! 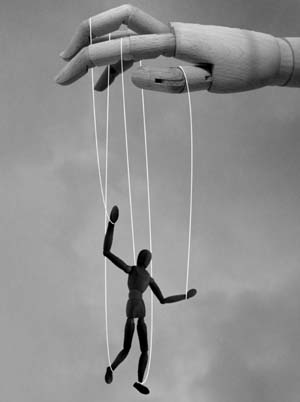 Control, Watch Out for This

Have you noticed this?  Jesus never lost control.  Here is his statement to Pontius Pilate. Check this out in John 19:10, 11: Pilate therefore said to him, “Do you refuse to speak to me?  Do you not know that I have power to release you, and power to crucify you?”  Jesus answered him, “You would have no power over me unless it had been given you from above; therefore the one who handed me over to you is guilty of a greater sin.”  If we go on to 12 we read this: From then on Pilate tried to release him.

Discern what is going on here.  Pilate who was in a position to dominate Jesus because he had all the power and authority is now backing away from using that power.  God was in control of this situation and Jesus spoke plainly about that.  Pilate was not the final authority.  Nevertheless in this case, Jesus had decided to allow himself to be killed so he was.

What do we learn from this?  First of all, if someone else has the mindset and the power to control another person, that other person needs to be aware of what is possibly happening.  Secondly, when possible do not let another person control you, either by smooth talking, argument or by force.  This does not mean that we cannot change our mind about something.  It does mean watching out for someone who has a manipulative way of getting into someone’s life and in one sense rendering them helpless.

Mahatma Gandhi of India was not going to be controlled by the British.  Yes, they put him in prison but they never got control of his mind.   He knew what he believed and what was good for him and his nation so he never allowed his beliefs to yield or succumb to the British.

Now when we get on this subject, we might think we are talking only about someone being forced to do something against their will.  Yes, there is that kind of control, for example, when a person is arrested, tried and put in prison.  Even that does not control the person’s thinking necessarily.

But there is another kind of control that is much more subtle.  We all have heard of mind control.  Here someone has created a way to shift the perceptions a person thinks about himself or herself or about the situation they are in.  This can be a much more hidden, obscure and sophisticated form of control. Con artists and connivers have often perfected this down to an art form so to speak.  Once enticed into this two challenges occur.   First, it is very hard to detect what is going on.  Secondly, because of the cleverness of it, the victim might have a very difficult time working up the courage to claim what they have detected or seen through.  They will have a hard time taking a bold step to escape the domination they are facing.   Even though their intuition might be prompting them to get out of the way, their inability to see the whole picture of what is going on may keep them from leaving.

How do people control others?

Intimidate them overtly or covertly

Make promises that will never be fulfilled

Deception, not only do they deceive others but they could well be self-deceived as well

Are funny, easy going, fun loving, appear to be free and not controlling as first step

They listen well, this helps them discover openings where they can now put a wedge in

Seek to keep track of what victim is thinking and keep heading them off, making sure they get little chance to think for themselves or escape the trap they are in.

Surround them with messages of love, get others to love bomb them.

Make victim think the perpetrator is on the right track and has the best reasoning and truths available.

Take advantage of the victim’s need to be needed and so provide them with an urgent opening for action.

Create or use a time when victim is tired or exhausted to pump messages into them.

Be nice, charm the victim.  (Notice “charm” here is a verb, not an adjective like a “charming” person)

Complement too profusely, beyond what is really there.

Apologize, catch victim off guard to think they, the perpetrator, is just too hard on the victim

Threaten harm to a relative or friend

Keep a threat going in the background without saying anything straight out.

Use telephone or text messages to sustain control

Get a victim talking by asking a question, making a request, asking for a favor.

Say all the right things, are thoughtful, create trust by being attentive.

Talk to what the victim is keen about or interested in (a subject hard to turn away from).

Will not take No for an answer.

Starts to insert “we” into the conversation as though they are on the same team with victim.

Make it look like both parties are dealing with the same problems and so building a relationship.

Say they get what the other person is saying but then switch the conversation to their agenda.

Wear victim down with insults, complaints, make the victim’s attitude the problem.

Seek to develop in the victim a sense of learned helplessness, no longer able to make decisions

Use humor to keep victim off guard, anyone joking around can’t be that bad, can they?

Get the person high on drugs or alcohol, secretly promote an addiction.

Use victim’s need for self-medication as a way of making them dependent.

Torture the victim until he or she relents

Blackmail the victim, threaten to expose the victim’s wrongdoing or secret.

Being a charismatic talker like Hitler was, mesmerizing the victim.

Take advantage of victim’s weaknesses or vulnerability or malleable sense of identity.

Asking for actions which belittle the victim so they have a hard time making choices.

Use mind control techniques to shift one’s sense of identity to something else.